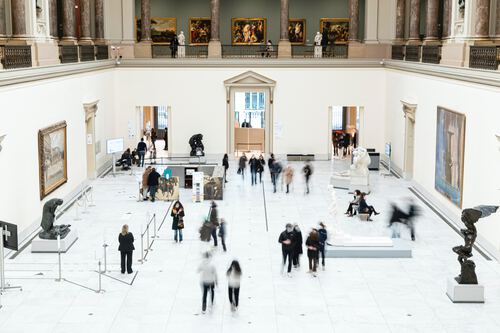 "We feel a bit trapped, with WordPress"
5 options

Corporate teams don't have the same needs as an individual. WordPress worked perfectly before, and still does, for many use cases. Not all use cases.

"We feel trapped" might be your feeling, but complaining in a corporate setting can be uncool, especially about a popular free platform. Still, you feel "Nobody on our team wants to wrestle with it. It's become a bit of a no-man's land."

"We used to have Fred, he loves WordPress and kept it all running. Now we're stuck with this thing, and nobody feels safe touching it. Most of the plugins are out of date, and frankly, it isn't performing like some of our competitor's sites."

"We DO have access to entry level developers that could help us, but this is WordPress, and fixing stuff touches the LAMP stack, which isn't in anyone's wheelhouse."

You're guessing someone would have developed faster, simpler, cheaper and less clever ways to do this. And you'd be right. A lot of free-like-WordPress alternatives have been developed, over the decades.

64 million sites are deployed to WordPress, and some are a bad fit. Especially in corporate departments, with increasingly app-like expectations and more complex and out of date plugin installations.

If you are looking for relief, here are 5 options that don't break the corporate norms of no complaining and staying away from weird stuff.

You are spared from technical details in this blog. As a result, many statements below are unsubstantiated

1. Throw time and budget at it

WordPress may be outdated and overly complex, but it's still just code.

With enough resources, there is no problem you can't solve, eventually. Might get expensive and you might miss some deadlines, but it can be done. Hey, I've been there!

This can be a bit of a red herring in terms of negotiating for budget, but WordPress isn't the only database driven CMS out there. Drupal, Joomla, ... the list goes on and on.

But there are two inherent issues here.

The CMS is two-decade old idea. It's free and seems really smart, but it's ancient tech, and it's waaay more complex and harder to maintain than some newer alternatives.

3. Investigate and migrate to one of the 327+ Static Site Generators

That's where I started, when we got so many calls about migrating off of WordPress. Here's a road map.

SSG's are dumber (think less clever) and simpler than a CMS. You might love the result, if you have the required skillset.

But here's the challenge. SSG's assume that at least one person on the team has the required skillset. "Which skillset?" you ask. Hah! Depends on which SSG! Hey, with 327 and counting, that includes 44 listed 'languages'.

My favorite SSG has been 11ty, but that's because it has a great reputation and requires the only the minimal universal developer skillset. Did some cool prototypes year before last, but never could sell it to my then-boss. He prefered a CMS approach.

OK, I'm going out on a limb here, because I've never used it.

Strattic hosts your WordPress, but then deploys it as an SSG would. Don't even get me started on how much better this could be, than server based WordPress.

But I would not choose that for my own sites. Because:

Please drop me a line if you try out Strattic. I'd love to learn about real life experiences with it.

Rocket is mostly 11ty - see number 3 above. Then some extra ease-of-use features were layered on top of 11ty.

What about the skills required? If your team has one developer with the minimal universal skillset, Rocket sticks to the standard HTML/CSS/JS that every dev has to know. He/she can look like a pro with Rocket, because the design sticks to simple standards that every modern browser follows.

And I created some starter themes to help you get started. Kinda like Wordpress: Themes. Niiiice!.

Conclusion - It is OK to think about alternatives to WordPress

Nobody is going to break the inertia of 64 million WordPress sites or 41% of the web, certainly not one dev like myself taking a year off to explore alternatives for the corporate world.

But there really are solid alternatives, if you're willing to explore them. You don't need someone like me if you've got enough time.

Or, visit any of my 17 experimental sites - like the one you are reading, or any other linked here.. Run Lighthouse scores. Compare with your own ideas on how you would customize a starter theme.

Then give Rocket - or any other SSG - a spin. We're talking minutes, not hours. You can do it for free, or get a paid walk-through. Or even a PoC package, if you want to evaluate your options more exhaustively.

If you're into detail, I've written ad-naseum on the hows and whys of WordPress and SSGs.

It might be just tech babble, to business types. But there it is, if you need more backup. Please remember, you may not be the only corporate department in the world wrestling with WordPress, and having an unpleasant experience.

Even if no-one feels comfortable talking about it, for fear of looking like a complainer, or appearing incompetent.

It's not you, I promise.